Stop repression and police brutaliy against refugee movement – protest against the eviction of the hunger- and thirststriking refugees in Munich! Rise up in solidarity with the refugees’ demand for receiving Asylum! Politicians and authorities, stop playing with the lives of refugees! Protest at german embassy in Vienna: Monday, 1st of July, at 11 pm, […]

“Following a long tradition of refugee struggles against the violation of our human rights, we set up the Refugee Protestcamp at Oranienplatz, Berlin on the 6th of October.”

“Since March 19, 2012, we, the refugees, have been involved in a struggle for obtaining the most elementary human rights, such as freedom and equality, because we will no longer accept to be treated as “foreigners” and human beings of third degree, but instead as every other citizen. This era of our struggle started with a small tent in Würzburg and grew to a huge movement that has been spreading all over Europe.” 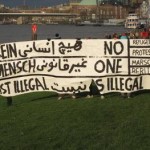 The coordinating committee of Germany-wide refugees’ strike sends solidary greetings to the refugee strikers in Vienna.

“The situation of refugees in Austria (as in Germany) is inhuman and intolerable!”