Month of visibility – we still demand our rights! We need a solution!

The refugees living in the Servitenkloster have succeeded in the prolongation of their stay until the end of October 2013. But their situation and basic demands are still unresolved. An uncertainty still lingers on the continuation of their struggles after October 2013. But they know that they will not allow their group to be separated into different refugee camps. Until now, there has not been any solution for a legal stay in Austria for the refugee activists. Over 20 of them are under serious threat of being deported because of negative asylum decisions, not regarding the threat they are facing in Pakistan and Afghanistan due to persecution, war and terror.

We also have to remind that outside the monastery, deportations are going on day by day. As one of many examples, a group of Pakistani refugees was recently deported on a charter flight. On the general level, Austrian politicians are strictly blocking any real change of the inhumane asylum system according to the. demands of the refugee movement. These are reasons to go out to gain visibility and solidarity!

From July till August 2013, we will go out to public places, show ourselves and call everyone, including representative people from Austrian politics and civil society, to come and listen to our demands for solutions. As this time coincides with Ramadan 2013, the refugees from Servitenkloster invite everyone – no matter if he or she belongs to any religion – to share their fast breaking dinner with them in public places. It is an occasion to share food and come together in a spirit of solidarity and supporting each other. It is also an occasion to think of those who can’t be here with us: Those who have been separated from us through deportations, as well as friends and family members living thousands of kilometers away, often under extremely difficult and dangerous conditions.

Our solidarity belongs to all refugees – especially those who are right now under urgent threat of deportation. Come along, share time and food with us and listen to our demands!

Programme for activities of refugee protest:

13th of July:
2pm – 6pm: Afternoon protest camp at Votivpark. Creating visibility, spending time together at refugee protest park. Rex Osa of The Voice Refugee Forum (Germany) will be there to share experience about refugee struggle.
8.30pm: Open dinner at Centro Once, Schneidergasse 15a / Simmering, as part of the event “we are all humans!”.
On this day, special commemoration will be dedicated to Cheibane Wague who was killed 10 years ago by racist Austrian police and medics!

19th of July:
7pm till open end: Protest rally with open dinner at Ballhausplatz, the place of Austrian Federal Chancellery, presidency and interior ministry. Refugees from Servitenkloster will meet with Afghan and other refugee communities to share experiences and create alliances.

26th of July:
7pm till open end: Protest rally with open dinner in front of the Austrian parliament
CANCELED 25.07.: Tomorrow there is no fasten breaking in front of the Parlament. 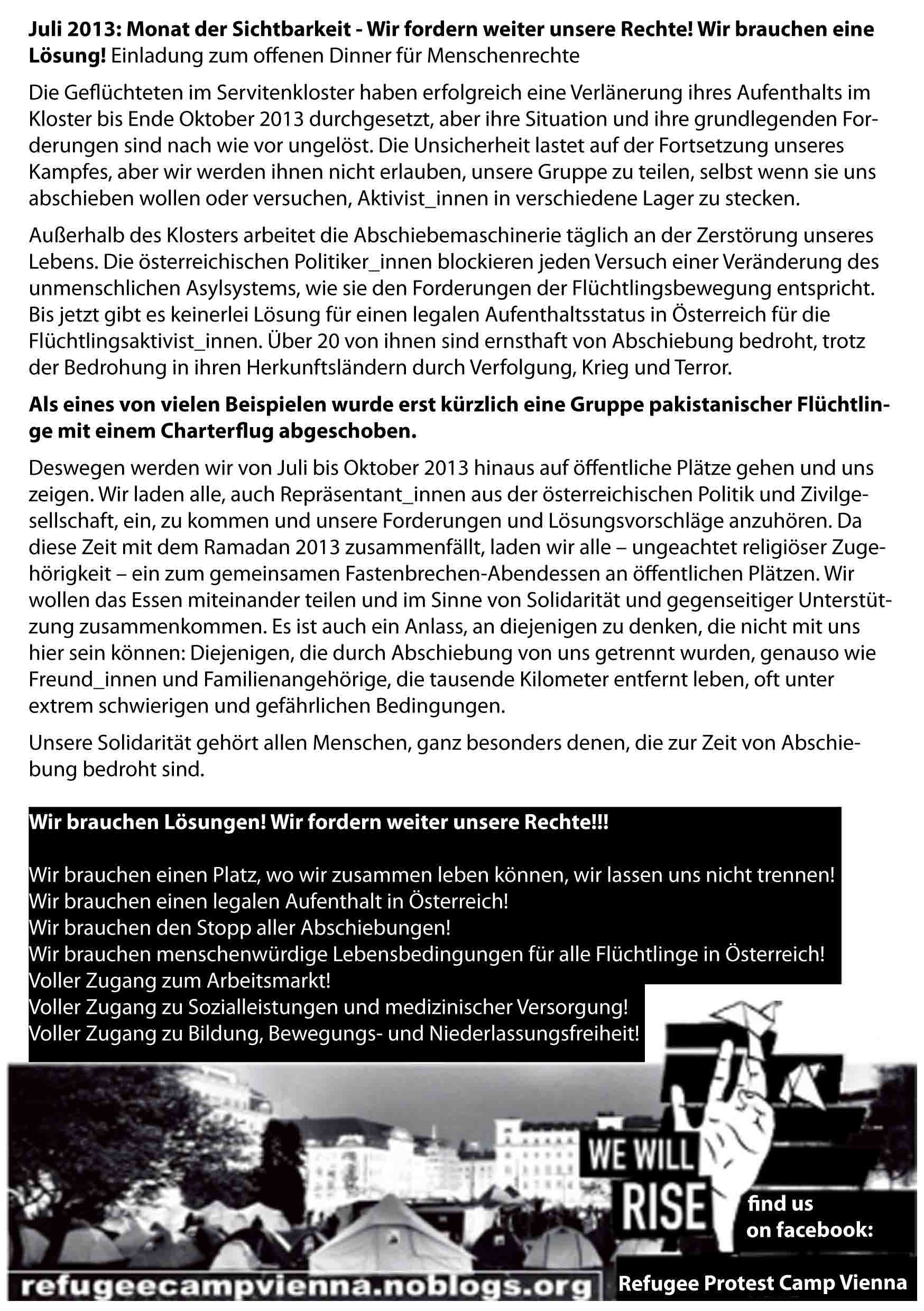 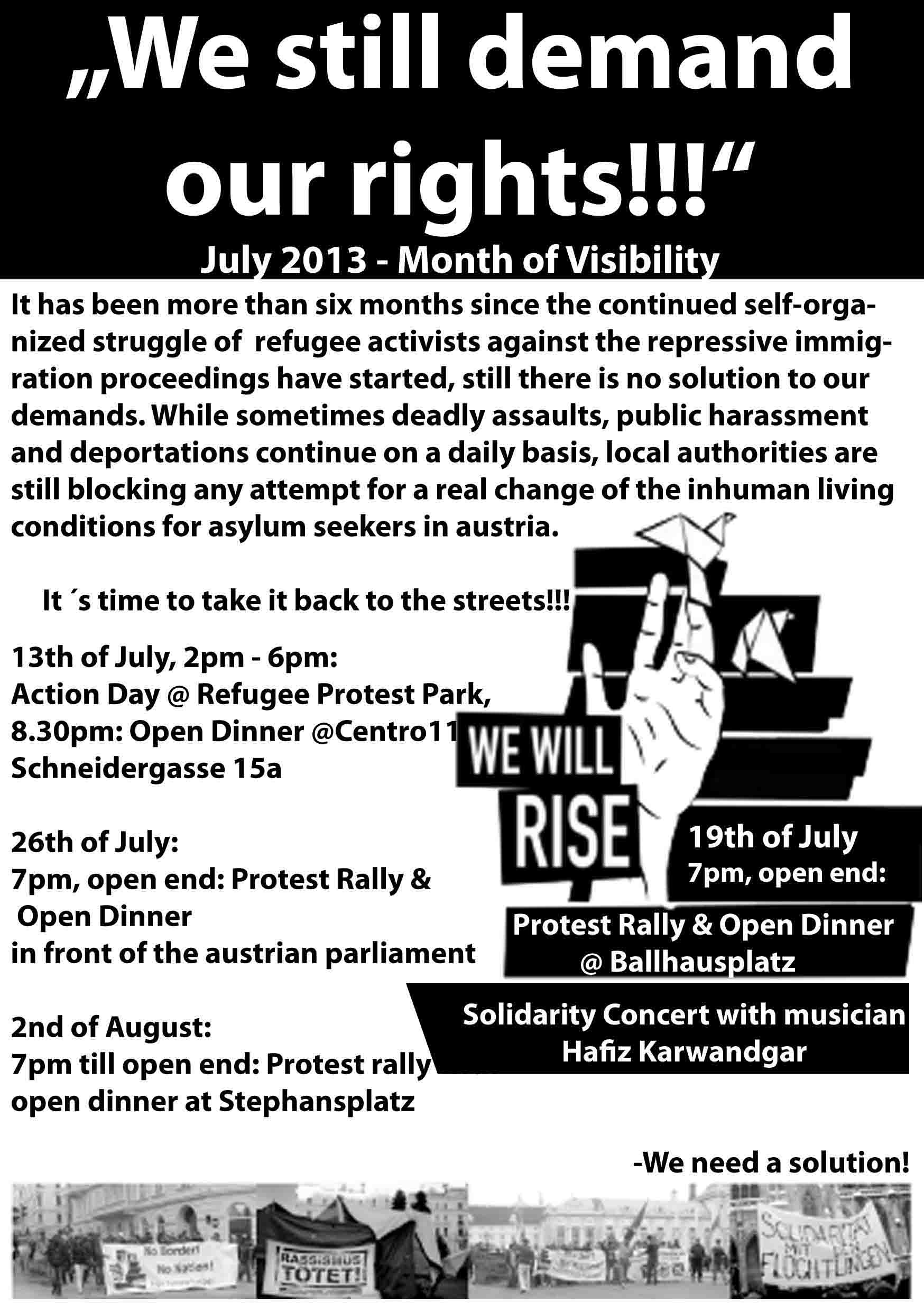 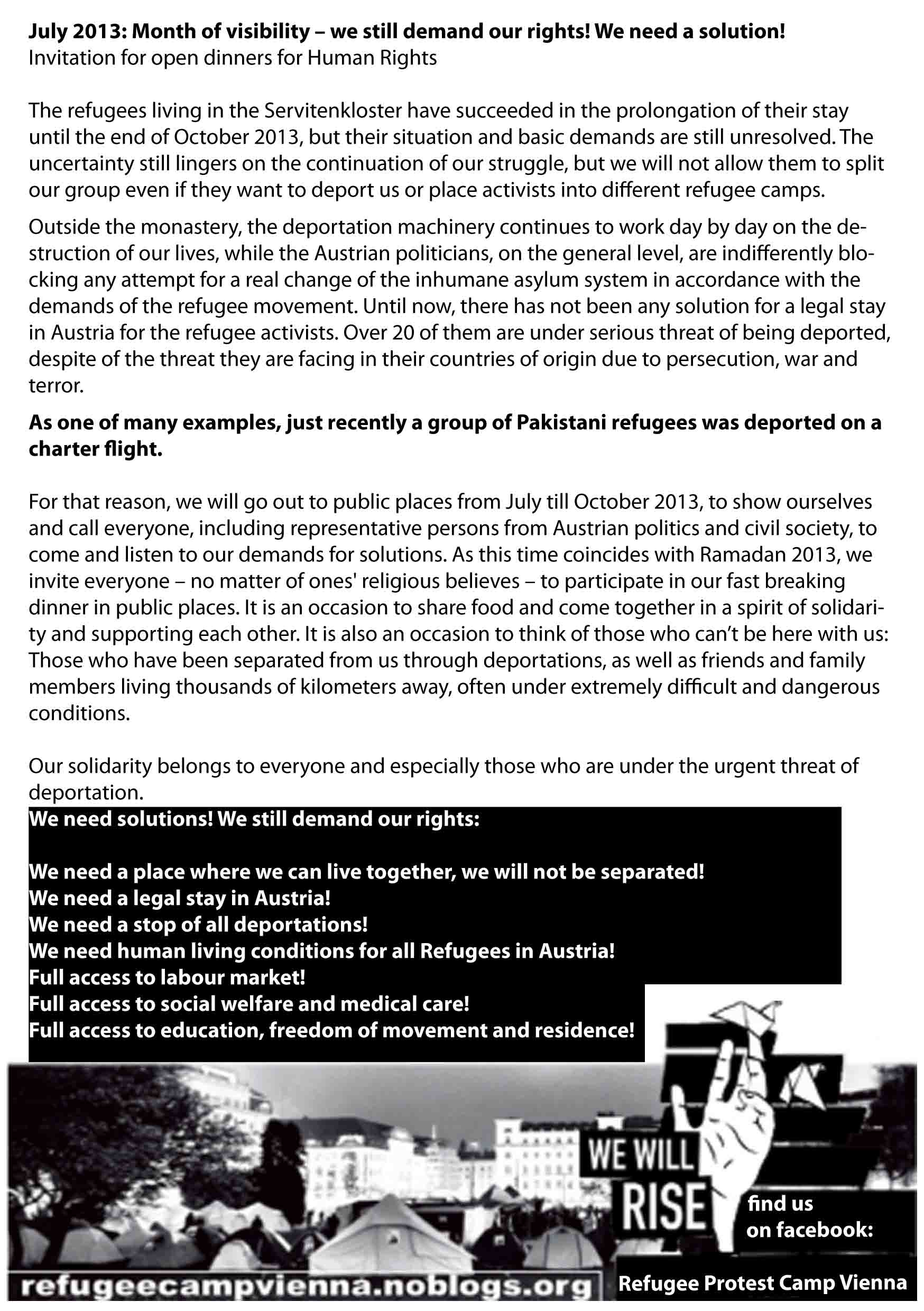