You are browsing the site archives by date.

We wrote a letter to Minister Mikl-Leitner, it would be nice, if many people also sent it to her, or a letter in your own words! 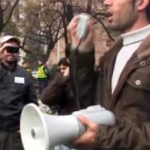 Bicske: Interviews With Refugees Living in Refugee Camp Near Budapest

As a follow-up to the refugee protests in Budapest end of November supporters started to shoot video interviews with refugees living in Bicske refugee camp near Budapest.